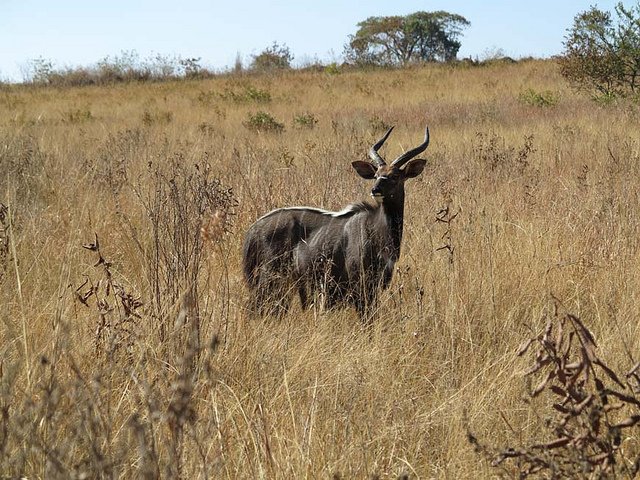 Todays plan was to go to the cave quite early (alright, around ten, not that early) to try to survey down to the river in the cave. We went away alright, however, the car we have been driven in the last few days had squeeky breaks, so somebody had a look at them and, no surprise, now they didn’t work at all. It didn’t took that many kilometers to decide to turn around and leave the car until someone take a new look at the breaks, and this time make them work better, not worse. Unfortunately, we could not get it done today, as we first hoped. So we had a second day off… Yesterday we went to Mlilwane Wildlife Sanctuaryfor hiking, spotting hippos, zebras really close, warthogs, and a lot of small (and large) antelopes of different kinds. Wish we had the Wild Swaziland-book, but it seems to be sould out everywhere.

Today we found ourselves with a couple of free hours, so we were suddenly walking off to Mantenga Nature Reserve and the Swazi Cultural Village. We payed the entrance fee, and hurried down the 1 km to the Village where the dance show (traditional dance from Swaziland that is) just had started. The bus load of school children lifted the show and made it all the more enjoyable. A short guided tour after the show in the empty “village” (“women in the mens are!” some of the Swazi visitors jokingly complained), and then off by foot the 700m to the waterfall. The water looked really tempting for a swim, but we had no swimming suits, not even any water to drink, so we headed back to Legends to see if the car was fixed. It was not. So we headed off along the road to a handicraft market “just around the corner” (it turned out to be about 3km), where we were the only guests. Back home to the lodge we were stoped by the police who even flashed his lights and sirenes, just because we were walking along the road in full daylight. He found it very amusing that to whites wanted to walk back home… Tomorrow we will make a new attempt to go to the cave and reach the river…