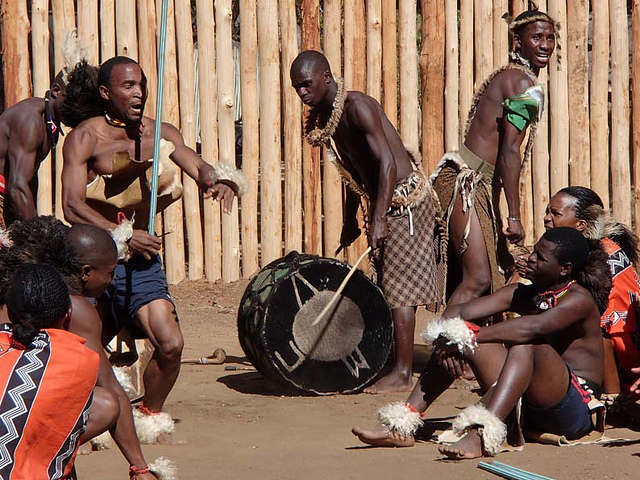 Yesterday we were supposed to go to the cave at around 10 and were really tagged to get going … after the second round abound and a close call with another car, we decided we would like to have some braking function on the car, which we go up the mountain with (and down) and returned to the office. The repair guy was said to be back within 2 hours and would fix the car, so we decided to walk to the Mantenga nature reserve and the Swazi Cultural Village.

After some delaying discussions at the entrance and a surprised “oh, you are WALKING”, we were shooed away to still catch a glimpse of the swazi dance which started at around the time the woman, who obviously does not walk anywhere, let us go off to our looooong 1 km walk to the village.
We arrived at the dance, which had started a few minutes before, and got good seats still – to watch the audience, which was the highlight of the show! A schoolclass of about 14-15 year old girls cheering the dancers as if they were the worlds best rockband

We also walked to the waterfalls in Mantenga valley and then headed back as the two hours were over soon.

Back in the office was no one and after a while Sipho turned up at the hostel telling us that there is no car.
After I collected my laundry from the close-by bushes (where the flew to after they fell off the line) we walked to the crafts market. The lady at the hostel said we can “go” there – but I start to think that my go and the African go are not the same. It was a very long walk along the main road at least. And we were the only people at the market.

On the way back to hostel we were stopped by a police with blue light and sirens – white-noses obviously don’t walk along the street. And it was not even dark yet (apart from that the police guy looked more suspicious than an average other person along the road).
We then even dared to go out for dinner and walk home in the darkness!

Our day yesterday was not that successful caving-wise but still good. It was very warm yesterday and for once I did not need to go to bed at 8 to keep warm!