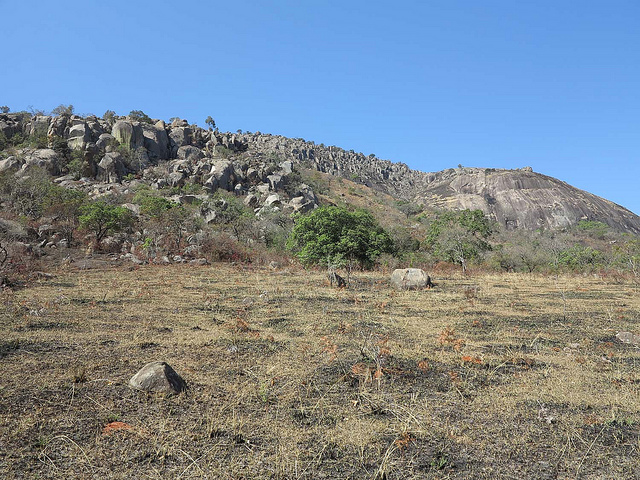 The landscape above Gobholo Cave.

202 meters and 43 meters, that’s the latest official length and depth, respectively, of Gobholo Caves, dating from Sunday. The last four days we have not mapped more in the cave; on monday we went together with Sipho upstreams the cave to where the river flows underground. Not much time in the afternoon when we reached the small homestay next to the sink, but it looks promising and it might be possible to follow the water underground. It was very tempting to give it a try, but I don’t know what the neighbours would say… On the way back we met two old women with a small herd of the most beautiful cows I ever saw. Tuesday we went the other direction; Sipho took us the hard way along the river in the spiky, thorny, unfriendly but (for me) very fun forest up to the resurgence, a boulder choke where the river flows out again. No possibilites to enter the cave that way. It was a struggling two hours or so walk to the resurgence, but only half hour easy walk along known paths back… Wednesday was the day we had our presentation for the Natural History Society in Mbabane. It was supposed to be Rabbe’s day, but since he was forced to stay in Sweden, I had to improvise something about granite caves in Sweden (Rabbe’s presentation from the Granite Cave Congress last year) and our result so far on this small recon trip. Some twenty persons attended, and we had a interesting exchange with the audience, including revealing anecdotes from times gone, and ideas about the pottery pieces found in the cave. Today Thursday Manu and I were driven to the homestay below the cave, and went on a tour just by ourselves to the cave and its surroundings. We spent three hours in the cave photographing and collecting samples of some of the speleothems for later investigation in Stockholm (and perhaps also in Spain). We also made an estimation of the hight difference between the entrance and the resurgence, and it seems to be only some few meters more than the lowest known point in the cave, indicating that Gobholo river flows more or less horizontal from the point we reach it in the cave. Early night today, it’s too cold to stay up.