My knees must be the most beautiful in the world! They are all red, blue and green – after only two days in the cave – or actually only one, because I had them colourful when I woke up too and just built on the “damage”. My arms are kind of the same, but keep to a nice blueish so far. 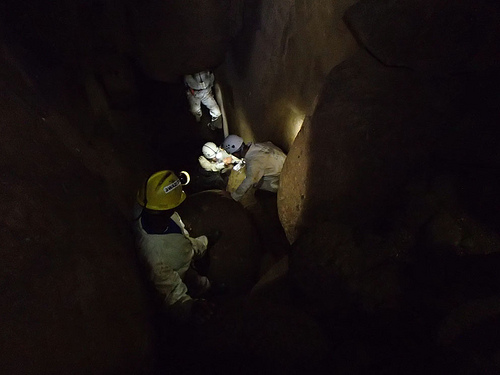 Yesterday we joined two tourist tours to get to know the cave and were underground for about 4 hours. There are loads of bats (3 species), spiders, crickets and also histoplasmosis :~
Some bats woke up and squicked hysterically and flew around our ears, quite an experience. In Europe you can hardly get access to bat-caves anymore.

The hike up to the cave is nice, takes about 45 minutes and goes mostly through forest. We started from an estate further up in the forest in a very nice and quiet area, where we are supposed to stay. The only problem though is that there is no furniture there. It would be nice to stay there, there are so many birds in the forest and there are several papaya-trees. We’ll see if they manage to furnish it before we leave.

The groups we joined were 18-25 year old Canadians and Americans, which was quite funny. After the caving we hiked back down in darkness, drove to the valley at around 21 and joined the groups to the hot springs and pizza and beer. Being me I of course was dead-tired at 22 and I had a hard time to keep my eyes open until midnight when we finally left the place and started back to the hostel.

Before our caving yesterday we took a walk around here and went to the local shopping center (where they do not sell shoes, I really would need some cheap ones I can use in the cave!), where we also went today before we headed off (they still had no shoes).

It struck me that things here are not much cheaper than back home (at least what we bought to eat so far). The SKR is as much as a SA rand and the rand is as much as a Emalangeni.
Will be interesting to get out of Ezulwini and see how the rest of Swaziland is – we will not only be underground

In the morning we got company of a family of small apes. First they were running around on the roof and then on the yard and in the trees. They were really funny, but the Africans did not share our amazement and chased them away.

Today was a much nicer and warmer day than yesterday, which was cloudy and humid, and we got company of Sipho, an employee from our host, who was very good company too. He talked a lot about life in Swaziland, the culture, birds, plants …
And then we started our measuring and mapping with some initial problems like our compass being not too optimal on Southern Hemisphere, but I think it will work out in the end. So far we measured the main entrance and the beginnig of the tourist route (which is what we will focus on the beginning) and were at -21 m when we left the cave just before it got dark.
On the way down we found some good specimen of not-granite and I will also collect some of the earth which is bright red (like the tennis-court sand).
Driving back down in darkness in a car with no brakes and a driver who seems rather new to that kind of activity is another story …

Now I need a beer!

ISV Caving 12th July (41)(s), a photo by Swazi Trails on Flickr. For the time being, I just want to point you to Swazi Trails’ photostream on Flickr.